About The Keystone Chorus

The rehearsal room fills with the synchronized singing of two dozen men, harmonizing on the question posed by Paul McCartney in an old Beatles ditty: “Will you still need me, will you still feed me, when I’m 64?”

“I’ve been here for, believe it or not, almost 10 years,” Rauch, a Bethel Park High School graduate and Dormont resident, recalls. “Everyone kind of laughed at me when I first joined, because I was this 16-year-old with a bunch of 60- and 70-year-olds.”

His retort: “I’m having fun. What are you doing with your Tuesday nights?”

Men of all ages have a standing invitation to attend Keystone Chorus rehearsals, which start at 7:30 each week at Hamilton Presbyterian Church in Bethel Park.

“Anybody can show up, anytime,” Stan Kleja of Upper St. Clair, immediate past president, says. “People think that they have to know music. All they have to do is be able to show up and want to have fun.”
This year marks the 60th anniversary of the Society for the Preservation and Encouragement of Barber Shop Quartet Singing in America Inc. – “Barbershop Harmony Society” is the succinct version – awarding a charter to the South Hills chapter.

While the barbershop a cappella vocal style is based on the four parts of lead, tenor, baritone and bass, the format can be expanded to larger ensembles.

“We’ll have anywhere between three and about eight guys on a part right now, given our size,” Rauch explains. “They learn that one part so that if we go to a performance and only five of the guys from one section show up, that’s what we have.

“But the guys are really flexible and really great at working and understanding their role in the chorus. So whenever we are short on a part, they’re able to adapt right there on the spot. It’s a very high level of musicianship.”

And it’s one that can be achieved without much in the way of a musical background.
“We have some guys who have come here with absolutely no singing experience, whatsoever,” Rauch says. “And we help to build that individualized skill because at the end of the day, yes, we want to be a great musical ensemble. But at the same time, our organization is primarily about brotherhood and community service.”

Among the group’s performances are at senior centers and retirement homes, which Kleja particularly enjoys.

“You sing a song like ‘Let Me Call You Sweetheart’ or ‘Danny Boy,’ and you see how it affects them,” he says about audience members. “And then on top of that, when we’re done, we go talk to everybody. We go shake hands – ‘How ya doing?’ – because a lot of people don’t have somebody who comes and talks to them. So we’re there not just for the singing, but also for the social aspect.”

While tunes in the era of “When I’m Sixty-Four” have been around for half a century, they’re relatively new for the Keystone Chorus.

“Our repertoire has been increasingly diversified over the past couple of years,” Rauch explains. “We have that base in the older music, because it lends itself nicely to the
barbershop style. But we’ve been including a whole lot of music from the late ’50s and ’60s. We’ve definitely been working to try to build that slightly more contemporary repertoire, so that we can appeal to a broader audience.”

Songs by the Beatles and related acts were featured in the group’s 2017 annual show, which had the theme of British music. The set list for this year’s performance, scheduled for Oct. 20 at Boyce Middle School in Upper St. Clair, will be built around the time frame of the Keystone Chorus’ founding.

Other upcoming appearances include Aug. 5 at the Bethel Park Community Center, part of the Dean Streator Tower Concert Series, and on Aug. 13 at the Washington County Fair. Plus, the Keystone Chorus is available for hire throughout the year.

And thoughts of turning 64 can be either far into the future or the not-so-recent past. Just ask the group’s nonagenarians. 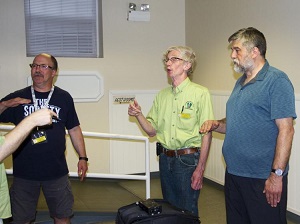 From left, Mark Schroeder and Ken Dobbins, Keystone Chorus president, try to help teach a thing or two to a visiting journalist. (Photo by Bob Seeger)

Staff writer Harry Funk, a professional journalist for three-plus decades, has been on the staff of The Almanac since 2015. He has a bachelor’s degree in journalism and master of business administration, both from Indiana University of Pennsylvania.

Sign up for our newsletter to receive the latest news and event postings.